War Exhaustion and the Stability of Arms Treaties

Earlier this month, I wrote about Iranian nuclear intransigence. In this post, I want to generalize the argument: war exhaustion sabotages long-term arms treaties.

This is part of my dissertation plan, so some background is in order. My main theoretical chapter shows that if declining states can’t threaten preventive war to stop rising states from proliferating, they can buy them off instead. The idea is that weapons are costly to develop. Rising states don’t have any reason to proliferate if they are already receiving most of the concessions they wish to obtain. Meanwhile, the declining state is happy to offer those concessions to deter the rising state from proliferating.

(I derive these utilities from a more general bargaining setup, so I suggest you look at the paper if you think these seem a little off. I personally wouldn’t blame you, since it seems strange that Iran prefers accepting bribes to taking bribes and proliferating anyway.)

Given that, we have the following game: 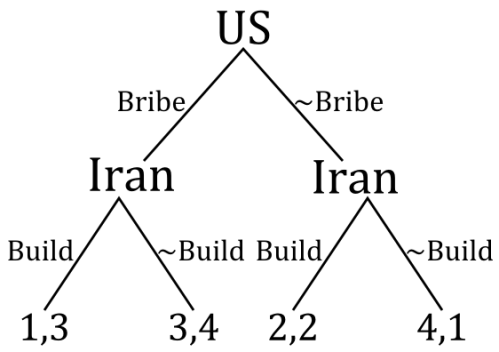 Great! Iran should not proliferate. But…yeah…that’s not happening at the moment. Why?

One problem is the reason why Iran prefers not building if the United States is bribing. The idea here is that bribes are permanent. By continuing to receive these bribes for the rest of time, Iran sees no need to proliferate since it is already raking in the concessions and nuclear weapons will only waste money.

But what if the United States had the power to renege on the concessions? In the future, the US will no longer be suffering from war exhaustion from Afghanistan and Iraq and will force Iran not to proliferate by threat of preventive war. At that point, the US can renege on the bribe without any sort of repercussions.

Again, boiling the argument down to the simplest game possible, we have this:

Backward induction gives us that the US will renege (why give when you don’t have to?). So Iran builds regardless of whether the US offers a bribe (it’s a ruse!). Proliferation results today because the United States can treat Iran as essentially nuclear incapable in the future. Iran has a window of opportunity and must take it while it can.

This is neat because a commitment problem sabotages negotiations. Recovering from war exhaustion makes the United States stronger in the sense that it will be more willing to fight as time progresses. Yet, this additional strength causes bargaining to fail, since Iran fears that the United States will cut off concessions at some point down the line. More power isn’t always better.

In addition to discussing Iran, the chapter also talks about the Soviet nuclear program circa 1948, which is fascinating. We often take Moscow’s decision to proliferate as a given. Of course the Soviet Union wanted nuclear weapons–there was a cold war going on! But this doesn’t explain why the United States didn’t just buy off the Soviet Union and avoid the mess of the Cold War. Certainly both sides would have been better off without the nuclear arms race.

Again, war exhaustion sabotaged the bargaining process. The United States was not about to invade Russia immediately after World War II ended. Thus, the Soviets had a window of opportunity to proliferate unimpeded and chose to jump through that window. The U.S. was helpless to stop the Soviet Union–we had zero (ZERO!) spies on the ground at the end of WWII and thus had no clue where to begin even if we wanted to prevent. The same causal mechanism led to intransigence in two cases separated by about 60 years.

If this argument sounds interesting to you, I suggest reading my chapter on it. (Apologies that some of the internal links will fail, since the attachment contains only one chapter of a larger project.) I give a much richer version of the model that removes the hokeyness. Feel free to let me know what you think.