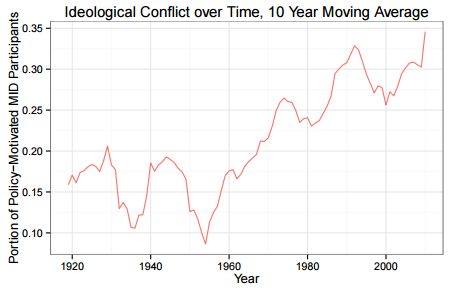 Abstract: Studies of bargaining and war generally focus on two sources of incomplete information: uncertainty over the probability of victory and uncertainty over the costs of fighting. We introduce uncertainty over preferences of a spatial policy and argue for its relevance in international negotiations. Under these conditions, standard results from the bargaining model of war break down: peace can be Pareto inefficient and it may be impossible to avoid war. We then extend the model to allow for cheap talk pre-play communications. Whereas incentives to misrepresent normally render cheap talk irrelevant, here communication can cause peace and ensure that agreements are efficient. Moreover, peace can become more likely as (1) the proposer’s belief about its opponent becomes less precise and (2) the costs of war decrease. Our results indicate one major purpose of diplomacy is simply to communicate preferences and that such communications can be credible.

Published in the Journal of Theoretical Politics.