Every now and then, I hear someone say that game theory doesn’t tell us anything we don’t already know. In a sense, they are right—game theory is a methodology, so it’s not really telling us anything that our assumptions are not. However, I challenge someone to tell me that they would have believed most of the things below if we didn’t have formal modeling.

Am I missing anything? 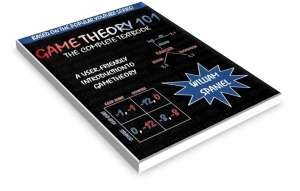 This entry was posted in Game Theory and tagged Game Theory. Bookmark the permalink.